How Many Hammocks Are Enough?

Like many things the answer is always X+1 with X being the number you currently own but a number that can change over time. Some people have too many hockey cards while others have too many Funko Pops. We probably have too many hammocks. But the formula is right there in the first line, so… yeah. NMBL and I each bought another hammock.

Of course we want to try them out before heading off on our next trip. It would be irresponsible if we didn’t. That meant us walking down to our local park to co-opt a few trees and get a feel for our new hanging beds. Overall we’re both happy with the new purchases. We’ve been a few years with some go-to hammocks so it is time to be in new beds as wear and tear take slowly their toll on the old ones. Still, the old ones are serviceable. Did we need to? Not necessarily. However we both had something in the back of our minds that help us justify the purchases. Bug nets.

I’ve been using the ENO Double Nest almost exclusively since day one of us hammocking. NMBL has used the ENO as well as the Dutchware Half-Wit (my dalliance outside of ENO). Both hammocks have been good. The ENO’s solution to bugs, however, is an unwieldy external bug net that you have to slip over your completed sleep system. It’s a pain in the neck to get in and out of, it limits your diagonal lay, and it interferes with my belly sling. All of these things make it a pain to deploy and use. This is not good when you’re in a heavy mosquito or black fly situation like we were on the tail end of our last trip.

NMBL had her issues with the Half-Wit at the same time. Yes, it has an integrated bug net but only for your top half. It was hot as heck camping beside Lillooet Lake so sleeping without a top-quilt was nice… except she was getting eaten alive from the waist down if she kicked off her covers. It made for a restless sleep for her. That’s never good when you have a day of riding ahead of you. So, what to do?

It was time for us to get into the world of integrated bug nets. NMBL was the first to pull the trigger with a purchase of the aptly named Hammock Gear Bug Net Hammock. It’s a well put together hammock with some nice finishing. For $130US you get an 11′ long symmetrical gathered-end hammock with an integrated bug net that can be unzipped and stored in one end when the bugs aren’t as buggy. It’s got under quilt hooks to keep you insulation in place, easy to grab zipper pulls, a simple stuff sack, integrated ridge line, and continuous loop ends with carabiners on each end. NMBL opted for some extra storage with mesh peak-pockets for either end. It’s 58″ wide, quadruple stitched, and uses a hexagonal ripstop nylon fabric. All in all it’s a solid hammock and during our test hang she was quite comfortable.

I waited a bit longer to dig around and figure out what I wanted. Turns out I’m a bit more minimalist. My choice was the Warbonnet Eldorado asymmetrical bug net integrated hammock with triangulated tie-outs on one side that keep the bug net off your face at night. It’s a simple approach to hammocking being a gathered end asym with nothing more than a stuff sack, integrated ridge line, and continuous loops at either end. I supplied my own ‘biners and at $125US it’s overall a great hammock at a good price. It’s fabric is a “traditional rip stop weave with a bias-directional diamond grid to create a fabric that has an incredibly comfortable cotton-like texture” according to the website. I’ll be darned if they aren’t right about that! The bug net is fully removable on the Eldorado giving you the option to better see the stars on bug-less nights. My only real niggle is the fact they don’t put in a nice zipper pull making zipping up the bug net a bit fiddly from the inside. I’ll add a couple myself but it just seems like an oversight. That aside, I’m happy with my 11′ long x 62″ wide Warbonnet. These guys are considered one of the big players in the hammock world and the Eldorado’s affordable elegance shows why.

We’re heading out to go camping near Tahsis on Vancouver Island very soon so we will both have a better idea of how we like the hammocks after a few nights sleep. With that in mind we’re both looking forward to trying them out! I’ll report back when we get home.

Trek of the Four Burritos

Travelling by motorcycle is all about pushing your boundaries, your comfort levels. You learn a lot about yourself when it comes to the physical excesses you are willing to expose yourself to alongside the uncertainty around your skills. Skills are improved through practice and doing, physical prowess is improved through good diet and exercise (which I’m guilty of ignoring). But there are other boundaries to push that are less obvious and, to some, not even boundaries at all. For NMBL and me that boundary push was travelling with others.

Our trip this July included two wonderful, talented people who were brave enough to take a chance on the two of us while we pushed the mental boundary of being just a husband-and-wife team. Kudos to CG and JS for joining in on our weirdness over four days. That takes a pair of reproductive organs.

Dusty Adventures: Hurtling Down the Hurley

Let’s step back a bit. As Covid limits what we can do and where we can go NMBL and I focused on a BC vacation for this year. You know, explore your own back yard and all that. And with the new bikes we really wanted to go someplace we couldn’t have visited on the FZ’s. With the ADV bikes however… we picked Gold Bridge. Not the easy way either. We went the Hurley.

The Hurley is a Wilderness Road in BC between Pemberton and Gold Bridge. Basically it’s a main logging road that’s also used by adventurous types to get to good hiking, fishing, prospecting, and off-road vehicle spots that are out of the way. It’s a bit (in)famous here in South Western BC as something of a challenge. The Hurley is known for wash-outs, sharp tire-shredding rocks, ongoing grader & excavator work, and soft gravel on the switchbacks at both ends. We had the privilege of experiencing the last three items on that list during our trek. END_OF_DOCUMENT_TOKEN_TO_BE_REPLACED

Strange times. When we finished up last riding season no one could have predicted that the world would be in the clutches of a pandemic. But here we are in the middle of a new riding season with a new set of social norms. Now we meet up at our usual spots and physically distance. Some of us wear masks. All of us have noticed the somewhat reduced traffic. And for those of us going on Forest Service Roads (FSR) we have seen a LOT of other motorcyclists (and ATV riders). It has been an interesting summer so far. 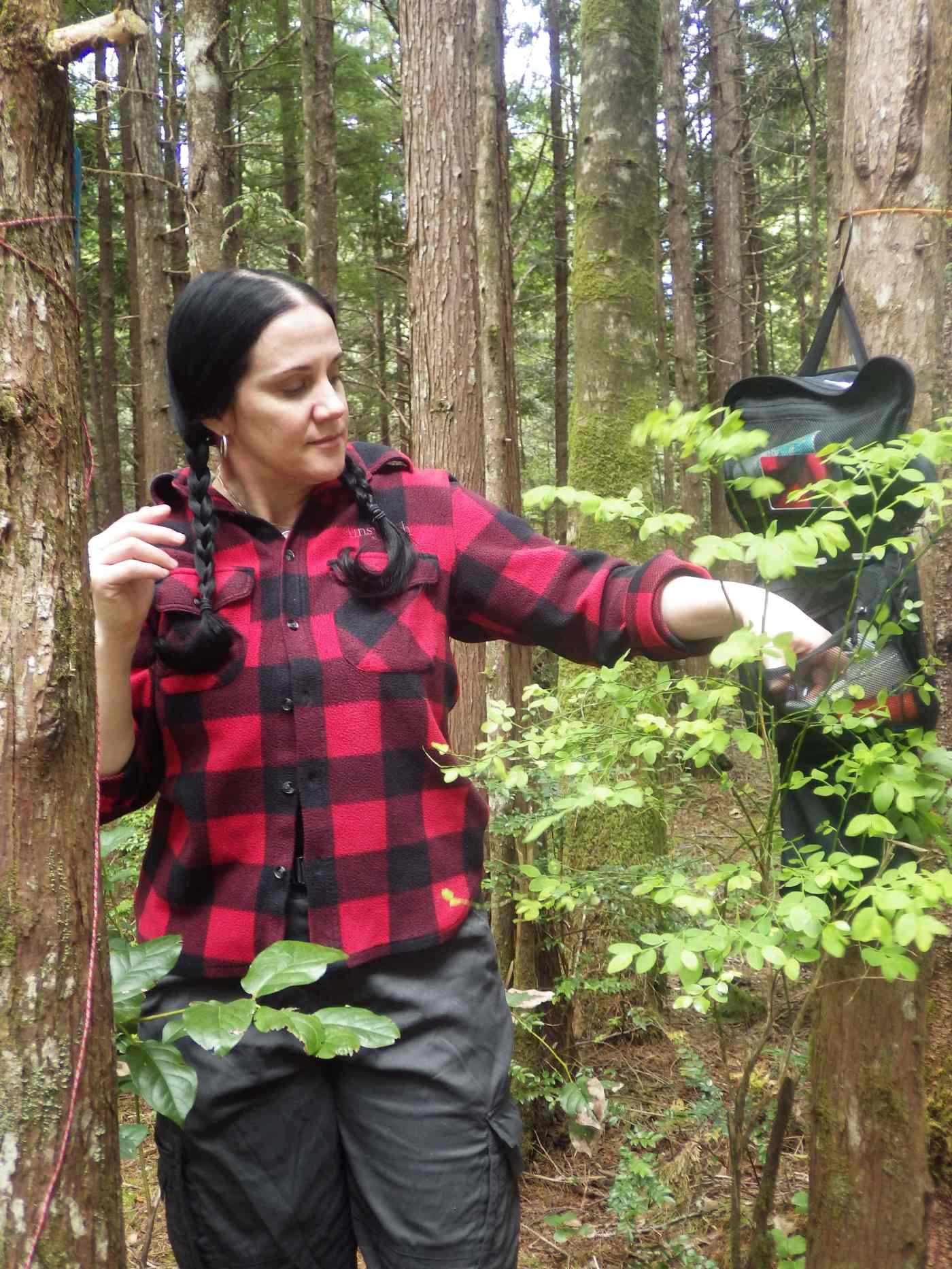 Many women don’t wear any makeup at all when motorcycling.  I understand that, and that’s definitely sometimes me.
But sometimes I want to [a] look better (or at least better-rested), and [b] benefit from the more-positive social responses people in Western societies tend to have towards women wearing makeup.
But who’s got time for a full face of makeup when there’s so much adventuring going on!?  (Also, wind and dust are going to make your eyes water on a motorcycle: you might as well face that fact.)  So it’s important to hit a good balance between practical and desirable.  Here’s where I go with that (all drug-store brands):

This helps keep skin healthy and helps protect against wind- and sun- burn (which we take on daily when whizzing through the atmosphere at high speeds).

END_OF_DOCUMENT_TOKEN_TO_BE_REPLACED

We’ve had some fun!

NMBL and I have been riding as much as possible so we can be comfortable on our new bikes. And what’s the point of not riding when the weather is nice? Heck, it was so nice in January when the Vancouver Motorcycle show was on we just road out to the Trade Ex because we could. And we weren’t the only ones! There were bikes aplenty in the motorcycle only VIP parking right out front. It was a great ego boost as well since the big Twin got a lot of attention from people heading into and out of the show. Oh, and here’s the new one for 2020 (which I din’t buy). But I did buy a subscription to Motorcycle Mojo magazine! END_OF_DOCUMENT_TOKEN_TO_BE_REPLACED

With all the smoke in the area NMBL and I are staying home and getting things done. One of those things is to work on reviews of more gear. Here’s another featuring the DutchWare Gear Half-Wit hammock. DutchWare Gear built its reputation on hammock tie-down accessories and making hammocks with the camper/backpacker in mind. As motorcycle hammock campers we’re always looking for good gear that gives us the best chance for success. See if our camping success is improved by the Half-Wit by clicking the link below:

We’ve taken today to relax in our hammocks. There’s a nice cool breeze keeping the heat at bay, we’re both feeling at little lazy, and I wanted to do some blog post editing and publishing while we had some free WiFi available. Beyond that the only things I’ve really done today are make breakfast a trend go to the grocery store to pick up some fresh food for dinner. I expect I’ll be making that when the time comes.

Our neighbours one site over, also motorcyclists, brought us over their remaining beer a trended a bag of chips. They couldn’t fit it on the bike. It was kind of them. We will bust it open when the other motorcycle hammockers join us this evening. Here’s to a good night and a bigger post tomorrow after we ride the 6 through the Monashees.

Bikers really know how to party.

NMBL and I both quit the party early last night. Neither of us drank much. We enjoyed good conversation, good music, and the company of some new friends. But we wanted to have a good ride in the morning. Everyone we talked to said that the 31A from Kaslo to New Denver was a great ride but to be careful. There are bears, deer, tight corners, and rough roads. Pay attention is what we were told. We wanted to be on our game.