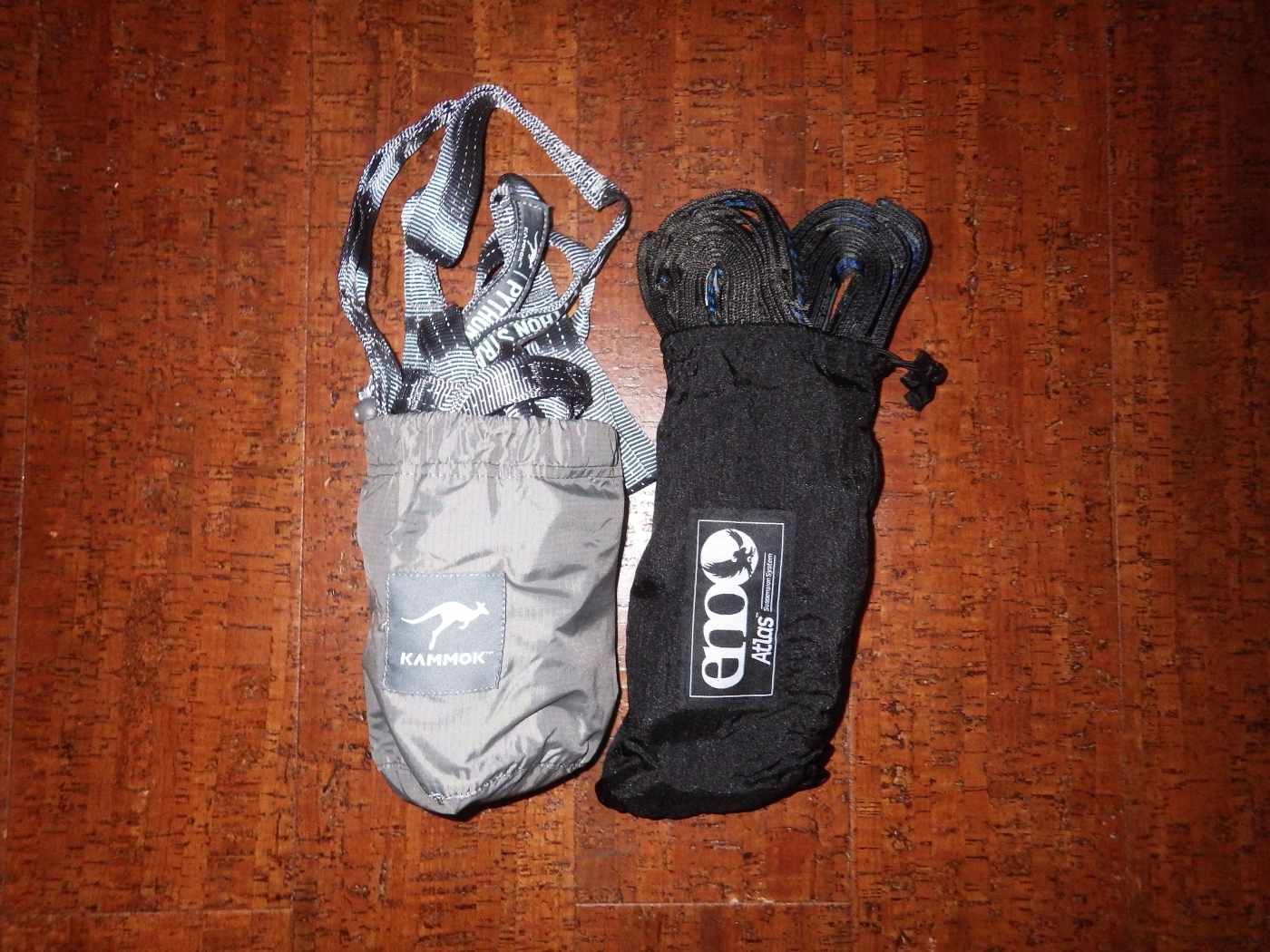 Daisy-chain tree-straps are the only tree straps you need to consider.  Even if your hammock came from the manufacturer with flat straps (or just rope), our advice is to get rid of all that and get some daisy-chains (recommendations below).  You may need to buy a couple of climbing carabiners if yours is a just-rope hammock, but once you realize how quick and easy, (and on-the-fly adjustable) daisy-chains are, you will never go back.  You may even start to wonder why any hammock manufacturers are working with anything else.

Here’s what a daisy-chain strap is made of: 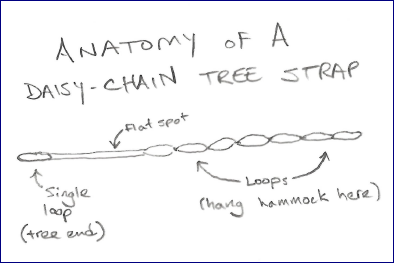 There’s the tree-end loop, a flat bit that wraps around the tree, and the daisy-chain of loops.  To use a strap like this, wrap the flat bit around the tree, and then feed the daisy-chain end through the tree-end loop.  Adjust the height, pull it tight, and you’re ready to hang your hammock.  Just pick the loop at the optimum height and clip the hammock carabiner through it: you’re done!

Gravity and friction work together to hold your hammock up with daisy-chain straps, and because the weight of your hammock gets spread out over the whole inch of the strap’s width, it doesn’t cut into the tree bark and damage the tree (rope, cable and spikes are all bad, tree-damaging ways to hang hammocks).

The two brands we tried were the two most popular: Eagles Nest Outfitters (ENO) Atlas and Kammok Python.

The regular Atlas straps are one inch wide and 9′ long.  They’re constructed of two straps, a longer one and a shorter one, sewn to each other in such a way that the finished strap is a daisy-chain of loops, any one of which can hold up to 200 lbs when the weight is in the correct orientation (more about that later). The difference in the length of the two straps that go into an Atlas is taken up in its loops: each loop stands out a little from the straight strap, which makes it easy to grab with the carabiner one-handed.

Because we live on the West Coast, we have occasionally run into a tree trunk that’s so big a single Atlas strap won’t reach all the way around it (or if it does, there’s not enough length left to hang the hammock from.  Sometimes when we’re traveling away from the Coast, we find little scrub oaks or junipers that are so slender, the daisy-chain begins too close to the ground for it to be useful to hang a hammock from (where you need to hang the carabiner, there’s just flat-spot).

Too-big or too-skinny trees bring up something important: the directionality of the hammock strap.  You have to be careful about the direction you apply force (gravity).  The Atlas strap is made to take the force of gravity on the lower end of the daisy-chain’s loops (and of course, on the single tree-end loop that keeps the whole thing up).

You can create a longer strap by stringing another Atlas strap to the last loop of the daisy-chain, or by running the second strap through the very last daisy-chain of the first one, then folding it over and putting the hammock carabiner through both the end-loop and one daisy-chain loop of the added strap (diagram below).  You have to ensure that the second strap is properly oriented, or else the forces will do damage to the strap (and thereby also possibly to you). 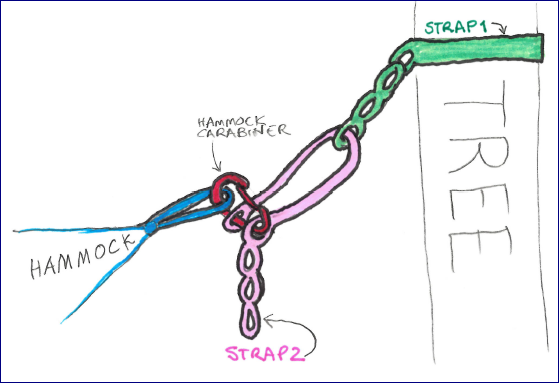 Do not be tempted to “shorten” an Atlas strap by using it with the daisy-chain end around the tree instead of the tree-end loop: those loops aren’t made to take the force of gravity in that direction and you will damage the strap’s stitching, possibly causing a fall.  Instead, attach the Atlas normally, and then shorten the unusable, loopless part of the strap by wrapping it around the tree a couple of extra times.

We like the Atlas straps a lot and have several sets.  They’re quick to set up and easy to use.  They’re also fairly easy to store (we like to spool them tidily before storing them, which keeps them separate and quick to deploy): they come from the factory neatly spooled up, held together with an elastic and slipped in their own little stuff-sack.

Atlas straps are dark in color and do not have any retroreflector woven in, so if you prefer to keep your camp inconspicuous, they’re on board with that.

These are narrower than the Atlas at about 0.75″ wide, but have an extra foot of length, at 10′.  Like the Atlas, the Python is constructed of two straps, sewn together to make a daisy-chain.  But it’s not sewn in loops like the Atlas: instead, the two straps are sewn together basically straight and side-by-side, so your hammock carabiner will be exerting force directly onto the stitching, rather than strap (don’t worry, though: it’s actually designed to take those forces on the stitching).  Like the Atlas, the Python has a single loop at the tree end, a flat spot and then the daisy-chain: also like the Atlas, you attach it to a tree by wrapping it around and slipping the daisy-chain through the single loop before tightening it.  Unlike the Atlas, the Python doesn’t have an open, loopy structure: it’s pretty slimline and flat once it’s out on a tree, which means that you may have to use your fingers to open the loop you want to clip the hammock’s carabiner through.  It’s not a make-or break feature, but the fact that you have to actually work a little to insert your carabiner makes a bit of a difference.

Same as Atlas: use a safe method of extending straps.

Same as Atlas: after inserting through the tree-end loop and pulling tight, wrap the flat spot around the tree to shorten to desired length.

We bought these thinking that their loopless design might make it easier to store them in a flat configuration, but that turned out to be a disappointment: once you start spooling the Python around itself, it won’t lie flat because there’s no slack on the outer side, so the inner side buckles up.  Kammok doesn’t even spool these straps straight from the factory: they come loosely bundled in their little stuff-sack.  For someone who just wants to stuff and go, the Python’s configuration might be OK.

They’re also a fairly conspicuous silver color with retroreflector woven in.  We’ve never garroted ourselves on hammock straps (guy lines, however, are a different story), so not sure how helpful that feature is; if you’re one of those people who just happens to like shiny retroreflectors, though, you’ll probably like these.

The difference between these two products is subtle: their length, width and price are all comparable, and they are both designed to avoid damaging live trees.  The Atlas may  be a better choice for a heavier hammock-camper (wider straps to distribute weight better), and also Atlas spools flat for storage (if you care about that sort of thing like we do).

ENO Atlas wins by a hair in this comparison, because when you’re trying to fit all your gear onto your motorcycle, the ability to compact and control it is more important than how much it actually weighs.  We prefer the tidy storage option Atlas offers, as well as the ease of grabbing a loop one-handed with a carabiner.