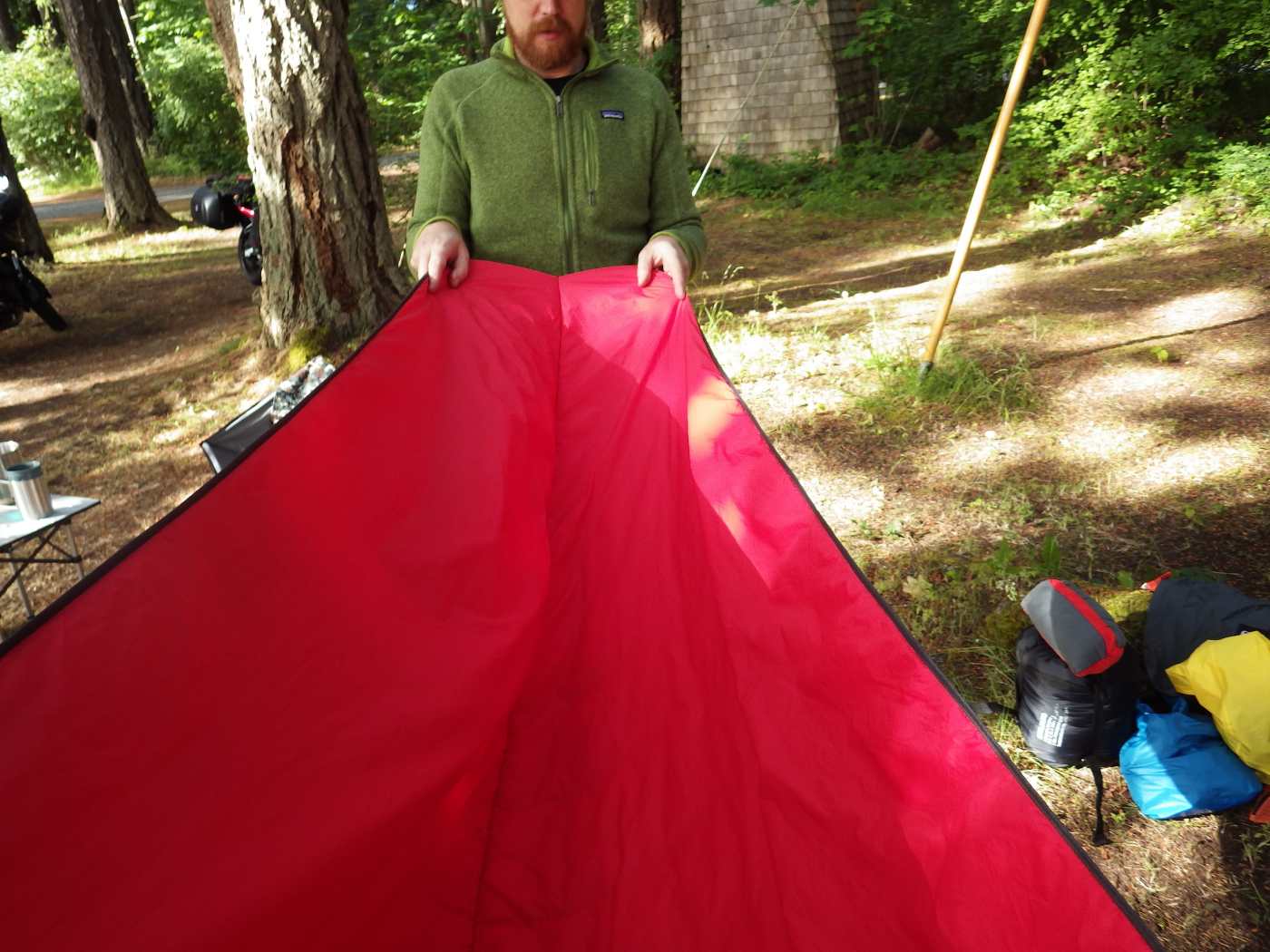 Under-what? Underquilt. It’s a thing us hammock campers need on chilly nights to avoid Cold Butt Syndrome. Since we’re suspended in the air, the underside of the hammock is open to heat loss which means your backside gets a wee bit cold. Enter the underquilt, a type of sleeping bag that is suspended under the hammock to create a layer of insulation.

Why doesn’t our sleeping bag help? Because when laying on it we completely defeat the insulative quality on the bottom of the bag. Basically we squish the loft of whatever the insulation is (synthetic or down). The insulation can only do its job when it traps warm air between the fibers. If those fibers are flattened no warm air is trapped. No warm air trapped between you and the world equals Cold Butt Syndrome.

With an underquilt we give ourselves that layer of loft between us and the cold, hopefully keeping us as snug as a bug in a rug. That’s the goal. With a good underquilt setup we can keep warm and toasty well into the winter. If you’re interested, there is some great discussion and ideas on Bottom Insulation on HammockForums.net. This is one of the most comprehensive hammocking information websites out there so be ready for some serious reading if you decide to start your research there. Anyway, with the above information out of the way, let’s get to my review of the ENO Ember 2 Underquilt.

NMBL purchased two Ember 2 underquilts to go with the Eno Double Nest hammocks she got for the two of us. The idea behind the Ember underquilts is that they are a cost effective option for cold weather, down to 50F or 10C. That’s not very cold by Canadian standards but should do the trick for hammocking from mid-spring to mid-autumn. The Ember 2’s are also very easy to set up with the shock cords just attaching to the carabiners on each end of the hammocks, so they should be the perfect companion for our needs as motorcyclists. Right? You’d like to think that.

Unfortunately the Ember 2 has a critical flaw; it’s shaped like a canoe. ENO calls this “a hammock specific cut”. What that means it’s very narrow at the ends where the shock cords attack the the rigging and wide around the middle of the hammock. This may seem like a good idea until you think about how you sleep in a hammock, which is diagonally. Sleeping at a diagonal to the center line of the hammock basically flattens out your bed due to all of the extra fabric. It’s really comfortable and you’re not shaped like a banana while sleeping. The Ember 2 forces you to sleep in a banana shape due to its design.

With the Ember 2 being so narrow at the ends any attempt to sleep diagonally to the center line of the hammock results in either your feet or your shoulders hanging outside of the underquilt. This is not good for two reasons: first, it’s darned cold for whatever bodypart is outside of the quilt. This doesn’t translate into the best night’s sleep. Second, it creates a ridge of fabric that you’re trying to lay over. It’s uncomfortable and results in, you guessed it, a poor night’s sleep. There is also another problem with having the ends narrow so much and that has to do with a tall guy like me.

Eno suggests that the Ember 2 is long enough to keep a 6’6″ person snug and warm. From the length alone that may be the case. Because of the taper, this just isn’t practical. I’m 6’1″ and while the length isn’t a problem, the Ember 2 tapers so much that it is too narrow to accommodate my shoulders completely. I end up being cold on one shoulder or the other. This also does not make for a good night’s sleep.

Put into practical use the ENO Ember 2 underquilt failed miserably for me. When NMBL and I did our Easter 2016 long weekend ride of the Olympic Peninsula we hit some very cold overnight temperatures at Sol Duc hot springs where all of the previously mentioned issues reared their ugly heads. All at once. If you’ve already read that post I don’t have to tell you that we woke up to a layer of ice on everything. I say ‘woke up’ like I actually slept. I hardly slept a wink that night because if my feet weren’t sticking out from the protection of the Ember 2 underquilt my shoulders were. My attempts to adjust the underquilt just meant that one area covered left another area uncovered. It wasn’t pleasant.

While I have had a disappointing relationship with the Ember 2 underquilt, NMBL has had a bit  better relationship with it. This is due to the fact that she is physically smaller than I am. It simply fits her better. That said, she doesn’t love it. We’re both looking at new underquilts and have been dreaming of the offerings from Loco Libre Gear. The Loco Libre Gear underquilts have a good reputation among hammock campers and are built BY a hammock camper. We’re hoping that counts for something. Stay tuned!