And it’s about time. Last year’s riding season was a bit crazy for us so we didn’t do any big rides or hangs. NMBL had her own adventure last year to GBB Fest but that was it! There was very little hammocking and even less motorcycling.

This year we’re getting our feet back on the pegs, hands on the throttles, and gear on the pillion. To get our butts used to the saddle again we once again trekked off to Tofino for the May long weekend. It was a great choice for a few reasons: first, Tofino is less than a day’s ride with some great mountain highway riding; second, it gives us a chance to suss out our gear with low risk after a year off; third, it’s just so damn beautiful over there! The west coast of Vancouver Island is one of the most striking places in an already stunning Province. We’re lucky to live here and have such a gem to travel to.

NMBL and I booked two extra days off to turn our west coast adventure into a five day, four night excursion. We avoided a lot of the holiday traffic which gave us the luxury of riding our ride. Our ride has a huge “enjoy the scenery” component to it. Highway 4 is worth taking your time on but is also very intolerant of inattention. We got off the Island Highway onto the 4 around mid-day where we proceeded to enjoy one of the best rides in BC. The weather threatened to get wet along the way, making good on that threat right around the construction zone at the Kennedy Lake summit. All the blasting put a lot of dust onto a very dangerous section of road. We were allowed to pass through just as the rain started, turning the dust into a slick slurry and slowing us down until we were well out of the blasting area.

We continued our ride to the campground, the rain let up, and our spirits soared as we road past Long Beach. Waves were rolling in off the open Pacific breathing a fine mist into the trees. It was stunning! After a wrong turn we made it to the Long Beach Campground, checked in (we had a reservation), and went to our campsite to set up. The roar of the ocean kept us entertained while we strung hammocks and hung tarps. Beds ready, kitchen set, we had a quick hot dinner before settling down to a rainy evening with a finicky fire. The fire gave us a chance to try a new piece of kit called a pocket bellows. I’ll follow this post up with a review but for now I’ll say that this thing is a must have for wet wood and weather. We went to sleep with the competing sounds of rain and surf as our lullaby. Other campers weren’t as lucky as us. I was awakened part way through the night by the sound of a tarp a few sites over collapsing from the weight of water. While someone had a wet night I went back to sleep warm and dry.

Tofino was wonderful to us once again. We went to the Wolf in the Fog for brunch on the recommendation of someone at work. We spent two days wandering the Tofino Botanical Gardens (a pass is good for three days!). We rode from Tofino to Ucluelet and back. We sat on the beach. We read in our hammocks. We napped. Our vacation was incredibly relaxing. The whole time our bikes and gear performed as expected. Well, almost. We also had one of the best burgers we’ve found in our travels. The Long Beach Golf Course and Campground where we stayed has a clubhouse restaurant where they grind fresh chuck beef each day for a very tasty burger. Check it out! 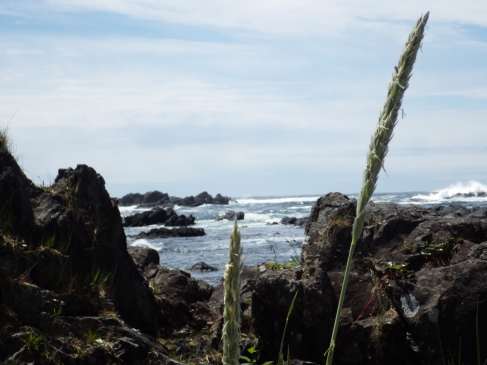 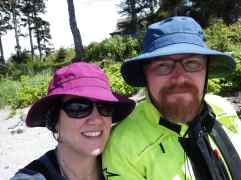 We left Tofino early Tuesday morning after striking camp and having breakfast at Darwin’s Cafe. Our journey back across Hwy 4 had the expected stop at the Kennedy Lake work zone as the expected delay. But we had an unexpected one on the way in to Port Alberni. Along a stretch that roams along Sproat Lake NMBL’s brand new clutch cable broke! We pulled over onto the very narrow shoulder to figure out how to deal with the problem. With no cell service in the area I sent NMBL off on my bike to find a phone while I waited with her bike.

It took NMBL about 45 minutes to find a phone, call BCAA, explain the situation, and get back to where I was waiting. From there we waited another hour and a half for the flat-deck from Alberni Towing to get to us. Unfortunately we couldn’t find a shop in town that had a replacement part and the only place that may have one was closed. At that point we decided to split up. The shop would be open the next day so NMBL stayed in Port Alberni for the night while I went on to the ferry and Vancouver as I had to work the next day. 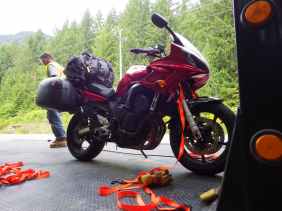 I got home to and email from NMBL saying that she was OK and the towing company would be taking her and her bike to the shop the next morning. I sent my reply, unpacked my gear, ate, and went to bed exhausted. It was a very tiring day.

All is well that ends well as the saying goes. NMBL received a repair to the clutch cable that got her home. We immediately went and ordered the Yamaha made part for her bike, another for mine, and an to keep with us just in case. Full disclosure, we bought the previous cable from eBay rather than from Yamaha. Sure we saved a few bucks on the part but it cost us in the end. Buy quality parts for you bikes, folks! It’s worth it.

That’s all for now. We’re planning our next trip for the end of June. Kootenays here we come!