It’s not often that one of us can get time off but the other one can’t, but it happened this year: NMBL wanted to go to GBB Fest, but DES’s work schedule just couldn’t accommodate that.

NMBL is an old hand at music festivals, having worked in lighting and entertainment at several of them in the past.  Often the last mile into the site is terrible, as festivals are frequently held at sites in more… uh… rustic locations.  While the private recreational park at Pekin Ferry (Ridgefield, WA) is sort of rustic-ish, the last mile of road into it was amazingly lovely: farmland with the freshest, smoothest, curviest asphalt you could ask for.

NMBL was met at the site by swarms of sweet folks: this three-day Grateful-Dead-inspired extravaganza attracts some very civic-minded people who cultivate an ethic of participation.  Plus, they like to dance.

She was also met by way more biker culture than she expected.  Motorcycles do not have to obtain parking passes to park on-site at this festival, and the GBB Festers were taking full advantage:

GBB Fest, for its small size, surprises instantly with the stratospheric level of its production values.  Even the site token wristband: this jacquard-woven ribbon is a piece of art in itself, held on the wrist by a high-tech directional-sliding bead that can tighten but not loosen.

NMBL got the sweetest camping spot, too: as the only hammock camper, she got the beautiful corner nearest the river, where it stayed shady in the August heat, and the river-breeze kept blowing in the daytime but died right down at night. 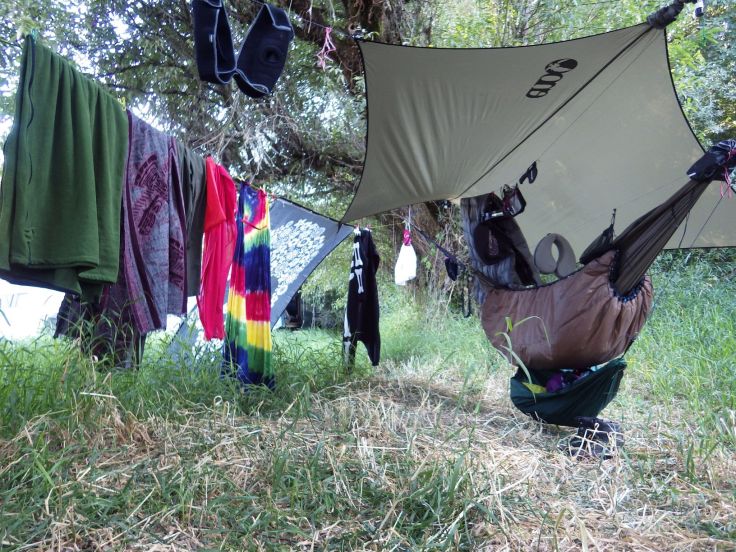 This spot came with a parking bonus: someone had obviously been using a sheet of plywood to store a boat, but they’d moved the boat away, leaving the perfect parking pad for a mid-sized motorbike in a lumpy (formerly muddy, now sun-baked) field.

Yep: NMBL flies a Grateful Dead pirate flag on her bike at music festivals… and elsewhere.

One of NMBL’s neighbors was camped in a tent right down by the river.  After getting his tent set up, he started looking for a place to hang his net hammock (with spreader bar).  He looked a bit lost, so hammock blogger NMBL offered to help.  She also told the neighbor about the danger of spreader bars (“Every hammock-fail video you’ve ever seen on YouTube was a spreader-bar hammock: we call ’em ‘danger-hammocks’.”)  Maybe NMBL was too vivid in her description of the troubles danger-hammocks can bring upon their hangers; she had offered to hang it for him, but he soon wanted her to take it away entirely!  It became part of Camp NMBL, slung low to the ground and not free to swing, so a couple of guests snoozed in it quite safely over the course of the weekend.

This is not a guest.  This is a onesie.

GBB Fest is a blast!  The food vendors were great, and the other vendors really interesting (NMBL bought DES a souvenir there too).

The Fest’s exemplary production values extended far beyond the wristbands.  The sound quality was exceptional for an outdoor event of this size, thanks to Mountain Air Studios‘ Mike J, who developed a feel for the site’s sound characteristics over the preceding years of the festival and has refined a method of tweaking levels while walking about the space.  The lighting and visuals were of a similarly high standard, with the Psychedelic Express Lightshow adding to the richness of the experience.  NMBL, being the consummate gear-head with a past in special-event production and a day-job in digital audio recording, fell right in with the sound and light folks, and the oh-so-kind Psychedelic Express folks taught her the ropes of good ol’ fashioned liquid-light presentation: what fun!

Liquid light is both liquid and light.  Discuss.

NMBL always sports a Deadhead sticker or two on her ride; Deadheads stick together and will help each other out on the road.  Her bike was definitely not the only one tricked out with tribal tattoos!

All too soon, the fun and music was over: GBB Fest can’t last forever.   The I-5 home was baking hot and moving slow, so instead of taking the straight shot home, NMBL decided to take an extra day-and-a-half and tour the Olympic Peninsula (a most-beloved touring destination for Pacific Northwest bikers).

Due to elevation and forest-fire smoke, the ride got really cold in spots: much colder than NMBL had planned for, in her mesh touring armor.  By dinner-time on day 1, NMBL was freezing and ready to stop.  She checked in at the Olympic Suites Inn at Forks, Washington, then popped out to acquire a puffy vest and some dinner from the local outfitters.  The Olympic Suites Inn is an unusual motel: it was probably originally built as townhouses/condos, and every single suite has a full kitchen with a full-sized oven and everything.  NMBL brought back some food to cook and enjoyed a hot meal and a shower before bed.

Here’s a shot of NMBL’s bike outside her motel suite, with Danger Hammock all wrapped up safe:

This ride was the smokiest of NMBL’s life.  She tried to take some photos here and there at scenic spots, but all that really could be seen was a bit of a haze.

It wasn’t hard to breathe, or hard to see the road; the Olympic Peninsula just wasn’t at its picturesque best in those conditions.

After three days of awesome people and music, and a further two days of awesome solo touring, NMBL had to hoof it back to the city to get back to work.  Maybe she’ll do it all again next year.